Guess Who Came to Dinner? 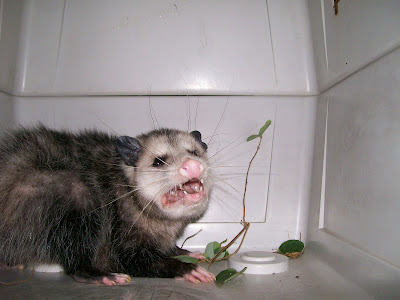 We had a bit of excitement last night in the form of an unwanted guest. Caught this old possum sneaking around in the back yard, probably trying to steal Tsion’s dinner. Mr Possum was quickly shoved into a large dog crate and given a change of address out to a wooded area a long way from our house!

While possum are interesting from the scientific point of view…the only marsupial in the US, the land mammal with the most teeth in the US (50 of them), and of course the way they “play possum” – feigning death to make predators seek a more appetizing meal, they certainly do not win any points in the attractive or intelligent scale. Nope…they are just ugly and dumb!

A few year back I went with some girlfriends to dinner at a restaurant here in Tennessee, and one of my friends brought a guest who was from New York City. Somehow the dinner topic turned to...rats (don’t ask me how they got on that subject)! The guest exclaimed in her Bronx accent, “I don’t care what you say about New York City having big rats, they are NOTHING compared to what I have seen since moving to the South!"

We tried to explain what a possum was, but all she said while shaking her head (and I quote), “I don’t care WHAT you call them down here, they are just a damn big RAT!”