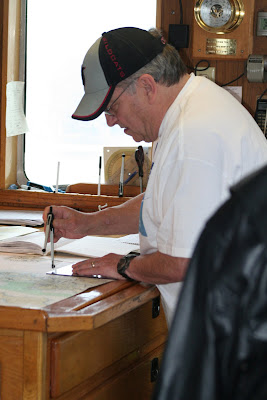 One point along the southern end of the passage is called the “Seymour Narrows”. I’m not sure if the cruise ships go thru it, but the smaller vessels do. And life can become exciting real fast in the narrows, from what Capt Joe said. The tide is rather strong at this point and when it changes direction the rips can be very strong…even to the point that there are whirlpools created. Joe said one ship he was on was completely spun around by one of them! Wow!

One reference says, “Seymour Narrows is a long, slender, dangerous stretch of water north of Campbell River, B.C.. Like many sites in this part of the world, vast amounts of water are forced by ocean tides through narrow passages, which creates high water currents (15 knots at times) and dangerous conditions — whirlpools, overfalls, and other boat-busting conditions.

Explorer George Vancouver described Seymour Narrows as "one of the vilest stretches of water in the world." The rapids have claimed over a hundred lives and is regarded by many sailors as the worst hazard to marine navigation on the British Columbia coast.”

We were going to go thru the narrows right at deep dusk. While we did set anchor awhile to wait for the worst of it to pass, the ride could become interesting without warning at any time.

And I wasn’t going to miss it for anything!

I bounced up to the bridge a bit after we brought the anchor up. Capt Joe was the only one up there and all the bridge lights were off but one (the glare on the windows is really bad with the lights on). I noticed he was talking a lot on the ship’s phone to engineering. And it was kinda strange that the deck hands weren’t hanging out either, but figured it was part and parcel of going thru.

So I sat down and waited for the ride to begin. Since it was pretty dark by now there wasn’t much to look at outside, so I picked up a magazine and thumbed thru it. Pretty dull stuff. Until I hear the radio crackle and the Canadian Coast Guard ask “Independence, what is your current situation?”

Hmmmm… they take going thru these narrows really serious! I flipped a couple more pages.

Then Capt Joe replies, “We are heading into Deepwater Bay on emergency steering…”

No wonder he’s been in such close communication with the engineers and the deck hands are scarce (read “BUSY”)! I look up from the magazine to find Capt Joe looking directly at me. I raised an eyebrow, he smiled. Well, he was relaxed and if he’s OK with what’s going on…so am I! I nod my head towards the stairs off the bridge to see if he wanted me to leave but he shook his head “no”. He then snapped off the last light, leaving the bridge illuminated by the instruments and the dim light over the charts.

For the next 15 minutes or so, I watch as 42 years of experience maneuvered us out of the narrows and safely into the bay where anchor was dropped until it could be figured out what was wrong. It was fascinating.

They got the problem fixed and we were on our way again...8 hours later than planned. 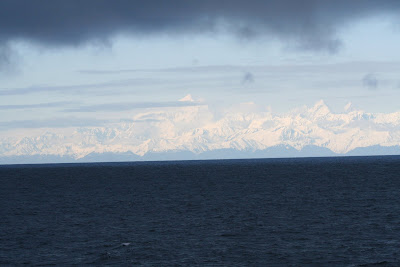 The appearance of Mt. Fairweather was the signal that soon we would be entering the famous Alaskan ‘Inner Passage’. If you’ve been on an Alaskan cruise, you know what I’m going to be talking about. Wow! When Himself and I were planning our upcoming cruise I suggested we do the Alaskan package. He reminded me that he goes that route 2 to 4 times a year. Yeah…yeah. 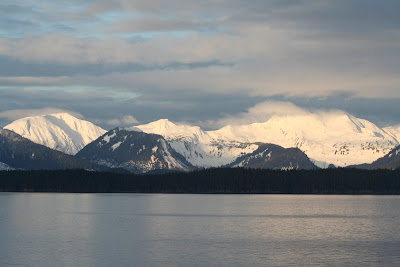 The passage from Point Spenser to Ketchikan is full of mountainous islands with snow covered peaks, quiet coves & passes full of fishing boats and an abundance of wildlife. 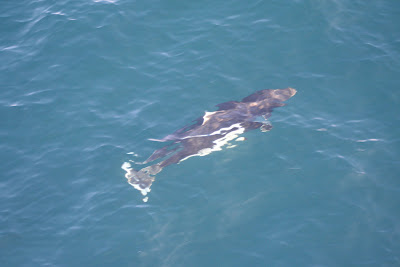 Along one area a pod of Dall porpoise rode the wake of the Independence for about 40 minutes. They would zoom along in the wake of the ship, tho for them it was probably like skiing a bunny slope. Dall can swim up to 25 miles an hour…the Indy – on a good day going with the tide and a strong tail wind – can get up to 9 miles an hour. From a port hole in the bow, I was able to watch them and get some great photos of their games. 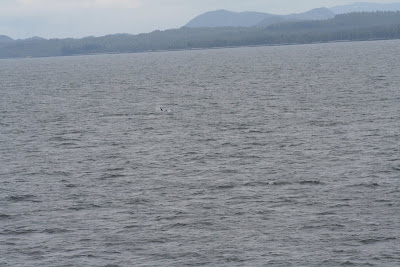 One time I was outside the bridge door taking some shots of a light house and I kept hearing a squeaking noise. Kinda like the sound of wet rubber-soled shoes on a vinyl floor. I finally looked around to try to figure out what sort of “Indy noise” that was (you wouldn’t believe the variety of sounds that ship can make!). Just as I turned I saw a huge fin slicing out of the water… a big male orca! He was gone too quickly to get a picture. A few minutes later I heard the squeaking again and started looking. Sure enough, there he was. This time he was too far to get a photo. Drat! Several more times I turned at the sound of his squeaks to watch him glide away from us. 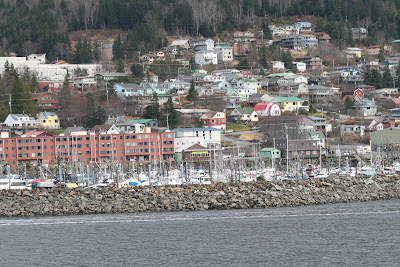 Ketchikan was the first place you could get a good cell phone signal. So for that small portion of the trip, so many people were up on the deck calling home…some for the first time in several months. I’d been to Ketchikan in ’02, so it was fun to see it from the water side instead of the road side. 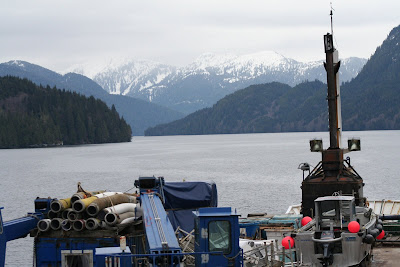 After leaving Ketchikan the passage narrows, becoming more “fjord” like, the land goes UP even more sharply...resulting in waterfall after waterfall. 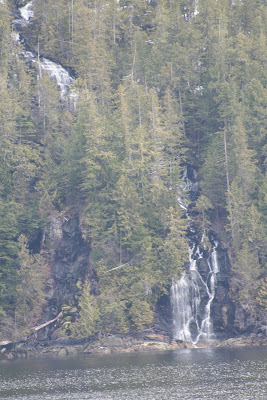 Some started at the top of the mountain and fell 300-400 feet to the waters of the passage. 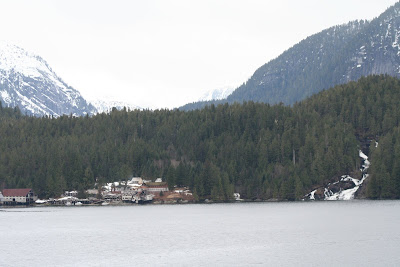 There are abandoned salmon canneries, 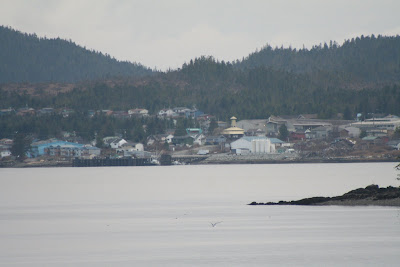 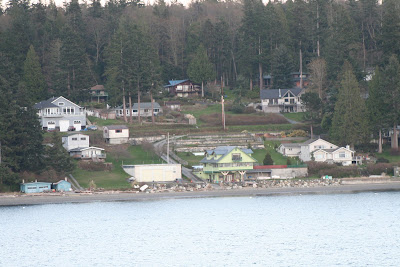 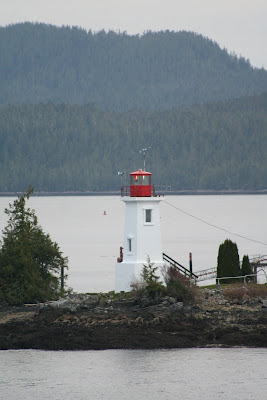 And all along the passage are lighthouses.
So… have you booked your cruise yet???
Posted by Teri at 9:28 AM No comments:

I’ve learned a lot during the purchase of our new home. There are things we would have done differently if we had known.

The looking for a house was bad enough. Who writes those listing descriptions anyway?? I have discovered that:
“view” = if you squint hard enough in a certain direction you might see it,
“get away from it all” = you’re out in the sticks,
“close knit neighborhood” = micro yards
“cute” = tiny,
“unique floor plan” = weird floor plan
“handy man special” = you are going to doing a lot of fix-ups,
“needs work” = neglected property,
“needs TLC” = it’s a dump.

We naively thought that when you made such a huge purchase that the sellers would have to do certain things…like make sure they had a clear title to sell the house, have a survey to show exactly what they were selling and have a home inspection to prove that there were no hidden dangers. But that is not the case. We have found out that it’s the buyers’ responsibility to make sure the sellers are honest in all areas!

If I could do it over again, I would:

# Require 15 BUSINESS days (or at least 10 business days because inspectors don’t work on weekends!) after the first offer (earnest money down) to have all needed inspections done so you know you are getting a house worth what you’ve offered. Our various inspections were so rushed (mainly the sellers realtor’s doing) that they really were not useful for true negotiations.

# Have these items as part of the inspection process: basic home inspection, waste water disposal system is adequate for the house size (an official document), termite inspection, and if needed inspections of chimney, septic tank, etc.

# Stipulation that seller remove ALL personal property AND garbage before closing. (You don’t want to know what a battle that was for us. They didn’t even clean out the refrigerator – and had moved out at least a month earlier, leaving behind eggs, meat and other stuff. YUCK! Can you say “biohazard”?)

# If drapes, etc are included in the MLS – have the seller make an inventory list. Our LR has two huge windows (not to mention the other windows in the house) and the MLS listed “drapes”. What we got was 2 rods and ONE set of curtains & sheers-- which they left thrown in the floor when we insisted they be produced.

# That all fauna move with the sellers! We got stuck with fish. Anyone want some free fish?? 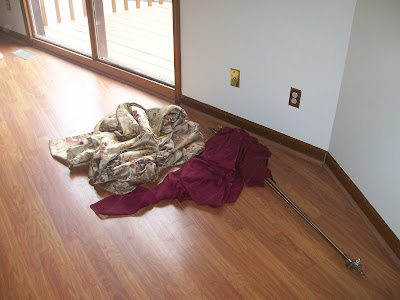 This is how they left our "drapes". 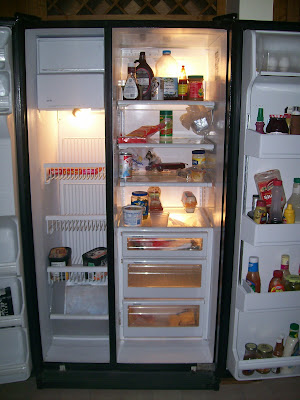 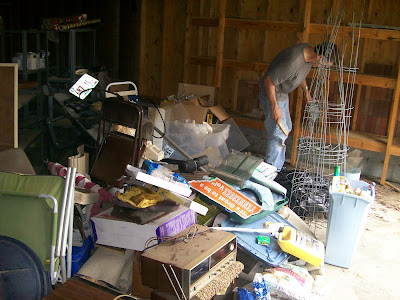 Sorry, but garbage wasn't on the MLS!!
Posted by Teri at 9:14 AM No comments: 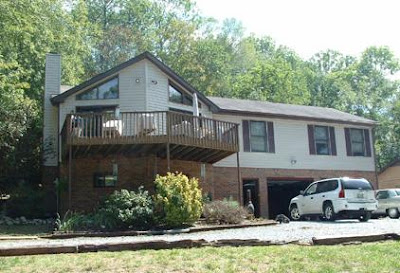 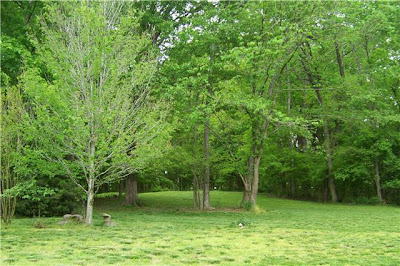 We have purchased our first home!

Why did we decide to move when we loved the house we were in? Basically it boiled down to the fact that our neighborhood was becoming a ‘hood. The people moving in brought with them stereos that shook our windows, pit bulls who would come at us in our own yard, trashed out cars in the driveways and screams & curses at their own children day and night. There came a point that enough was just enough.

After some searching, we found what our realtor described as a “unique property”. Nine miles from town, it is next to the Cumberland River. There is one neighbor across the street, and the next two are about a quarter mile up the hill…at the top edge of our 5.174 acres.

Yep, 5.174 acres. Mostly wooded with oak, maple and popular but enough yard to not feel claustrophobic. A bunch of garden beds are already laid out with stone borders and there is an area for a veggie garden too.

The house has a sort of contemporary design (that I am slowly going to work over to an ‘Arts and Crafts’ look). Tho it’s actually one story, with the finished walkout basement it’s 2 stories for us.

Upstairs is a large great room with a wood burning fireplace, hardwood floor and vaulted ceiling. It opens onto a deck. The roomy kitchen has more counter space than I have ever had. Fridge has an ice maker and water dispenser. There is an eat-in area that is the perfect size for the new dining room table. There are 2 guest rooms – one will become Himself’s office and the other will be the guest room. The master suite is big! We have a walk-in closet and a bath with a DEEP whirlpool tub. Ah…bliss!

Downstairs is the den which will be my office. 28X17 feet of scrapbooking-jewelry making-photo sorting SPACE. There is also a 10X10 utility room. The rest of the area is a two car garage…or in our case, a one car garage and storage room. There is also a detached garage for storing our yard stuff. We call it our “tractor shed”.

There are some adjustments to be made. Instead of a living room and a family room, we now have a large great room. Instead of a dining room, we now have an eat-in kitchen. And the hardest adjustment is that instead of 2 large guest bedrooms, we now have one small guest room. But there are good adjustments too. Enough storage room to actually park our truck in a garage-- so it won’t be boiling in the summer or freezing in the winter. A dishwasher (besides Himself). And the freedom to make any changes I feel like!

We have a lot of plans for the house to make it “ours”. From the immediate changes (light fixtures and the stove hood), to things we want to do in the next year (tiling of Himself’s office & hall bathroom & foyer, a kitchen remodel, and a master bath remodel), to projects that will happen in the years to come (such as my many landscaping plans, a front porch and driveway work).