Every year we take a trip. Some years we go overseas and some years are touring thru the US. The common factor is that I plan each one and then implement those plans on the journey. And although it’s a lot of fun, it’s also a tremendous amount of work.

So this last fall when we start batting around ideas for our ’08 trip, I stated I did NOT want to do some big excursion. I wanted a vacation where I could relax…maybe a resort or something like that. Just something that once I got it planned out, on the actual vacation I didn’t have to oversee a thousand details.

The trip we came up with was a cruise. Now we had to decide “where”.

An Alaskan cruise was nixed by Himself since he does that twice a year. (One of these days I’ll do it!) Caribbean was kinda ‘ho-hum’ to both of us. It’s so overdone now and we aren’t partiers. I didn’t feel like going overseas for a Mediterranean cruise. So we started leaning towards a Hawaiian cruise. A friend went on one with his wife last June and loved it.

But while researching the different cruise lines, I saw itineraries for cruises thru the Panama Canal. Wow! I trotted that pony past Himself, and he was just as excited as I was.

Out with Hawaii and in with the Panama Canal. 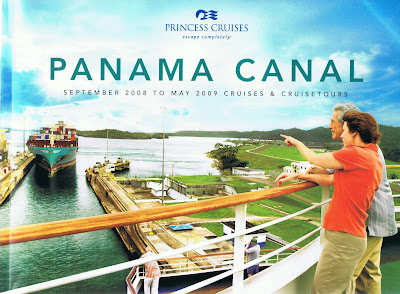 I found out that the Canal season is September thru April. After that, the lines bring their ships to the Caribbean for the summer party season. Since Himself works Jan – April and June – mid Sept, that narrowed down the ‘when’ pretty quickly.

We ended up going with Princess Lines (#2 choice was Holland America). Reason for Princess is that it offered everything we wanted at a better price. It’s not as glitzy as Holland America, but I really don’t care about a golden lobby.

We have a balcony suite on the right side of the ship (so we can watch land as we sail from the Canal to CA). The ports of call are Aruba, Columbia, thru the Panama Canal, Costa Rica, Nicaragua, Guatemala, and Huatulco Mexico. We get on in Ft Lauderdale and off in Los Angeles.

I can’t pick our excursions until July! --Sigh-- But looking at what they have offered this last season, I know what I’m aiming for. Aruba – snorkeling off a wooden sailing boat, Columbia – Panoramic Cartagena, Folkloric Show, the Canal is a thru cruise with no excursions, Costa Rica – a jungle canopy tour, Nicaragua - Colonial Granada, Masaya Volcano & Craft Market, Guatemala - Lake Atitlan & the Mayan Highlands, Mexico - Rural Communities & Traditions.

In Ft Lauderdale we want to go on an Everglades airboat tour, a cruise along the Ft Lauderdale shore and dinner at the Mai Kai dinner show. In LA, we’ll probably go with Gray Line and do a Hollywood tour and rent a car for a run down to San Diego. 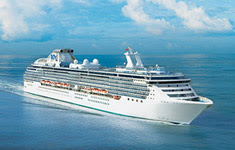 And there are things to do while you’re sailing too. Of course the first thing everyone thinks of is eating. Yes, there’s plenty of food. With Princess you can pick either seated dining (where you have the same time and table every meal) or open dining (such as a restaurant). We are doing open dining since we don’t want to be tied to a schedule or set of people. Seated and Open dining have the same menu, just a different atmosphere. There are 3 formal nights, which will be fun! (Can’t wait to go shopping for that!) But there are also classes offered – such as pottery, cooking, photography and so on. There’s the spa – I’m going to get my first full massage and facial!!

And the best part is once I get off that plane in Florida, I am The Queen. Everything will be set up and all I have to do is enjoy!
Posted by Teri at 10:35 AM 1 comment:

The images of Kenya in the news hurt.

Places that we visited 14 months ago are shrouded in smoke. Nairobi, Kisumu, Eldoret. This is insane. Two men who say they want the best for Kenya instead by their actions are tearing it apart. Kibaki, by all appearances, has cooked the election. Odinga is urging rioting. No longer Kenyans, now tribal Kikuyu and Luo. The common man has so little, those in the slums has even less. Yet they destroy what little they do have. Insanity.

I have 5 sponsor kids in Kenya. Two are Maasai and live far in the bush, they should be alright.

But 3 live in the slums of Nairobi, tho thank God not Kibera. Two are in Soweto. The headmaster of their school reports, “the last three days I have been spending in school with Holly house children. We are all terrified of what is going to happen at last. As write this email there are gun shots everywhere as the police fight to contain the protesters. Please Pray for us that we go back to our normal lives very soon.” And in the Dandora slum is Tyson, sponsored by friend JoAnna, but we visited him when we were there in ’06. I count him as one of “mine” too. Tyson is Luo. He is an orphan who lives with his older brother and family. I pray the brother doesn’t do something stupid.

The kids are supposed to be starting back to school on Monday. Starting their new year of classes. Will classes start on time? Will the school even be there? Will they be alive to go?

Damn it. It’s not supposed to be this way. 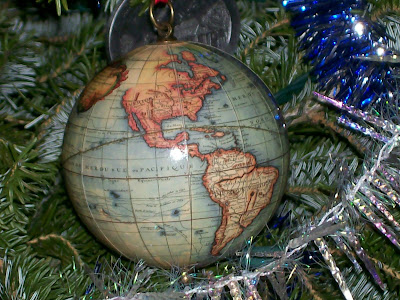 A new calendar is hung…2008. This will be my 30th calendar that I have filled in and will keep. Oh yeah… I have every calendar I’ve used all the way back to my little freebie Hallmark one of 1978 marking the days of my high school life. It’s fun sometime to look back over them. AND they’ve come in very handy in winning a few arguments too!

The last 3 calendars have been ones I’ve made at Walgreens.com using my photos from our trips. Brings back great memories with each month’s page. Another thing I like about these calendars is that you can preprint birthdays and other dates onto the pages (and if you did that the year before, you can transfer the data with one click).

I’ve already been writing in new events for a couple months. Photo shows…new sponsor kids birthdays…meetings…trip dates. It doesn’t take long for our calendar to start filling up! However, this year I am working on cutting back my obligations, mainly by not adding more in to the spaces that have opened up. So front seat this year will be church mission activities, my photography activities and my scrapbook book club.

And trips! I’m always planning my next trip and this year is shaping up to be exciting. Stay tuned for further details!