May God bless you with discomfort --
At easy answers, half-truths, and superficial relationships
So that you may live deep within your heart.

May God bless you with anger --
At injustice, oppression, and exploitation of people,
So that you may work for justice, freedom and peace.

May God bless you with tears --
To shed for those who suffer pain, rejection, hunger and war,
So that you may reach out your hand to comfort them
To turn their pain into joy.

And may God bless you with foolishness --
To believe that you can make a difference in the world,
So that you can do what others claim cannot be done
To bring justice and kindness to all our children, and the poor.

First… No, I do not get seasick.

Most of my trip was “at sea”. We left Adak on 20 March and reached dock at Tacoma, WA on 5 April…and only 2 of those days were we docked at other places (Akutan and Bellingham).

Two of those traveling days were stormy… 25 foot seas with some waves breaking at the bridge (six stories from the water line!) and wind gusts up to 80 MPH. Winds were sustained at 55-60 MPH. Temps were the mid-20s. Life just is not good in that type of mess. Even if you don’t get seasick, you still have to move about. And in moving about you can get slammed from one side to the other. Your knees just feel cruddy when it’s over from the grinding they’ve taken trying to keep you upright. Things that weren’t bolted or tied down came crashing to the floor… as did some things that were secured! Just laying in bed you sometimes had to grab hold. I would sure hate to have been in one of the top bunks!!!

We were rocking in a circular motion...the normal up and down from the ship moving forward combined with a stronger side to side motion from the waves. Then on occasion, a wave would hit really hard at some weird angle that felt like some giant had hauled off and kicked the ship. A loud vibratty "thooong" would ring thru the whole ship while it shuddered. It kind of felt like when you're driving thru a deep wet snow and your car is lurching along as it pushes, then all a sudden hitting some washboard potholes. 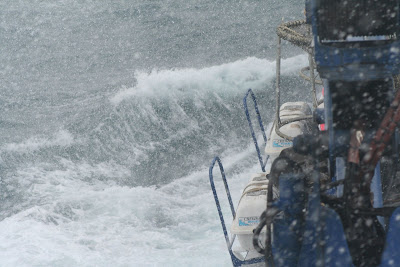 But most days were quiet sailing. The ship just rolls along with an occasional ‘rip’ hitting that makes life interesting. GREAT sleeping. Like rocking a baby! 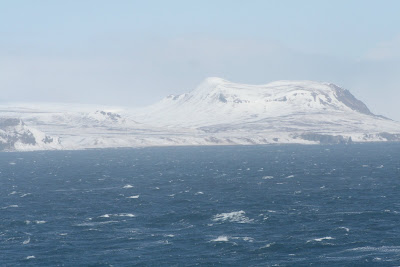 For the most part, we were always in sight of land. The snow covered Aluetian Islands or the fjords of the Inner Passage made for an ever-changing scene. 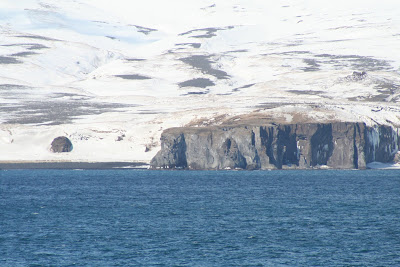 However, we did have 3 days of crossing the Gulf of Alaska. We were blessed with perfect weather, a very rare thing indeed. To quote Coleridge, "Water, water everywhere..." and tho the waters are not becalmed as they were in the "Ryme of the Ancient Mariner", we had excellent sailing. Soft, rolling waves with very little wind. 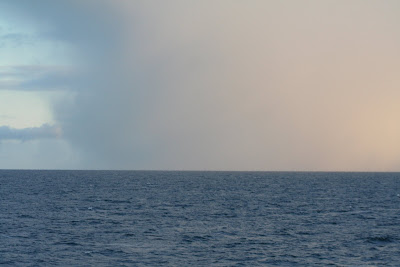 Changing colors and moods of the sea. 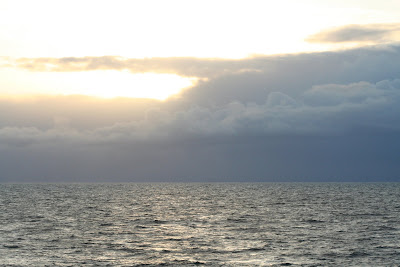 The ocean is so big here it's like you can see halfway to tomorrow (truth be told...we were not that far from the international dateline) but anyway, it's really cool to watch as we approach a cloud system.
You can see ahead of you a misty 'curtain' that you can no longer see the horizon thru. Sometimes you can look to one side or the other and see the edges of it. Eventually it gets closer and closer until it brushes upon the deck, then across in a full blizzard and finally over the windows of the bridge (which I have been informed that on a "marine" vessel is called "the wheelhouse"). When you get to the other side it happens in reverse, with the air slowly clearing until once again you are in the open. The snow we are getting are those giant springtime snowflakes, so it's really pretty. 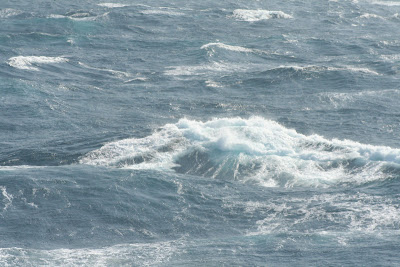 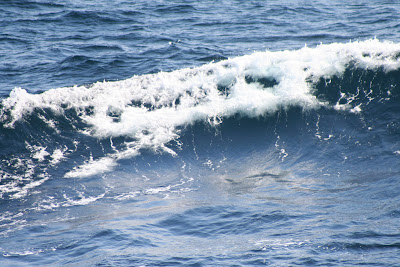 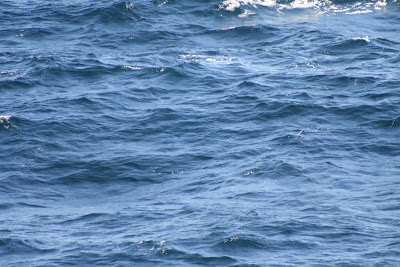 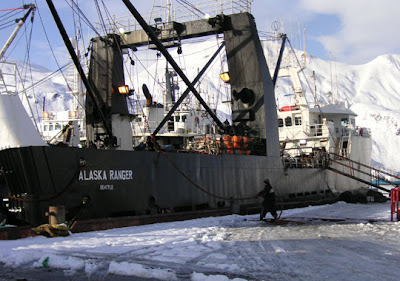 I’m not going to get into the shoulda-woulda-coulda arguments nor am I going to speculate the strengths and weaknesses of those involved. As anyone in the marine community knows, next time it could be them. This is just a telling of the event as I experienced it.

I went up to the bridge fairly early on Easter morning. Even tho it was still dark, I wanted to hear the latest ETA on getting into Akutan as I was eager to do some exploring. The night before we had tried to get thru the pass between Unalaska Island (home to Dutch Harbor) and Akutan Island, but the strong spring tide and the stormy weather made it impossible. So we went back and waited in a quiet cove until sometime late in the night for the tide change.

As I came up the stairs, I noticed the bridge was subdued and all the radios were blaring. I headed over to the ‘thingy’ (GPS?) that shows the ship’s current lat/long position so I could find our position on the chart. (Doing that is something that Capt Mark taught me how to do on my ride to Ketchikan in ’02). There is where I heard the first hushed “…men in the water…” and “…Coast Guard is reporting a mile long string of beacon lights…”

I slipped over to the bosun to ask him what was going on. He told me that a fishing vessel was taking on water and that the crew had abandoned ship. The Coast Guard and all available ships were responding in rescue mode. We were too far away to participate.

I immediately headed down to Himself’s office where I knew he and Pastor Martin were having their morning coffee time. I told them what was going on and we sent up prayers for the crew and the rescuers.

Throughout the morning I stayed up on the bridge quite a bit, listening to the news as it came in. The number of men in the water climbed from the 20s up to the 40s. During my afternoon on Akutan Island we didn’t hear anything, so I stopped by the bridge before heading to the galley for supper. The latest news was the ship was the Alaskan Ranger, and all 47 members of the crew had abandoned ship. There were at least 4 lost and one was missing.

The next day we learned the Chief Engineer who was lost was a friend of Himself’s – Chief Dan Cook. One of those saved was a friend of both of ours, 1st Assistant Engineer James Madruga. And the captain, Capt Eric Jacobsen, was a very good friend of Capt Joe.

Sometimes the fishing world is too small… 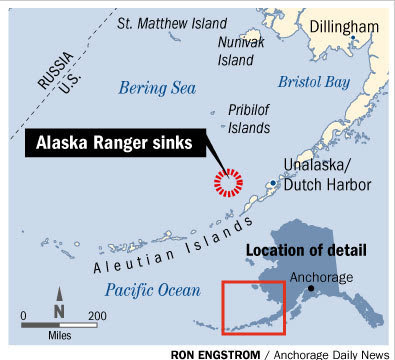 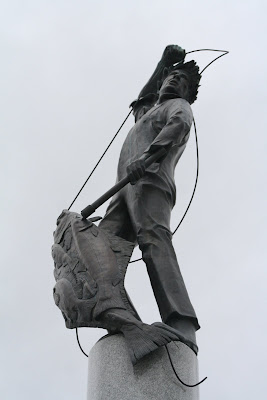 Detail of the Fisherman's Memorial in Seattle, WA. 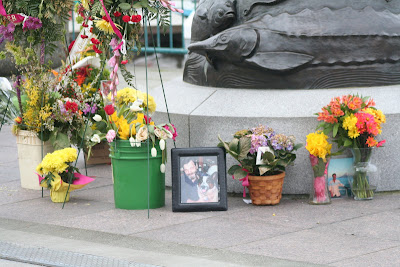 Tributes at the base of the memorial. The photo is of Capt Eric Jacobsen.

After a few days of sometimes stormy travel, we reached Akutan on Easter Sunday. The weather was still strong, with 50 knot winds whipping down from the mountain. Capt Joe made a few attempts to dock but gave up and headed to the middle of the harbor to wait for the weather to settle down. 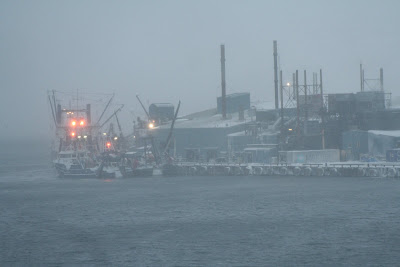 Stormy weather
Akutan town is home to about 75 Native Alaskans and to the Trident shore plant, which employs about 1000 people. Homes, shops and the plant are nestled along a strip of rocky beach with the hinge point a large church and recreation facility built by Trident founder Chuck Bundrant. There is also a seaplane port where the Grumman Goose planes land in the harbor and taxi thru the water up onto the beach. Himself has spent a lot of time here and was eager to show me around. 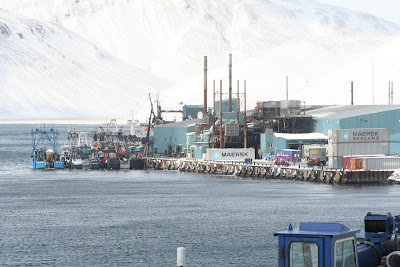 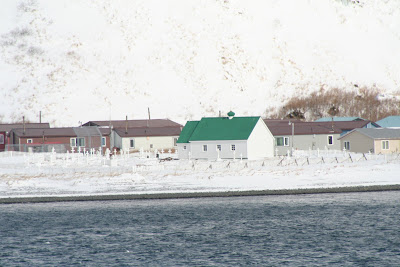 After several hours of waiting, the gangplank was put into place and the mass exodus occurred. Everyone was ready to have a little time to shop, call home and just walk around. Including me! 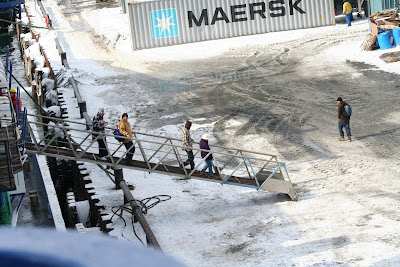 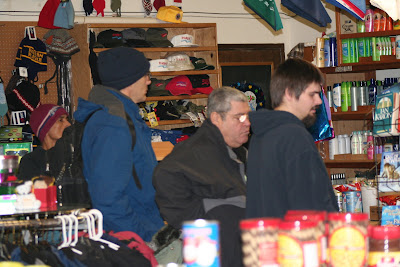 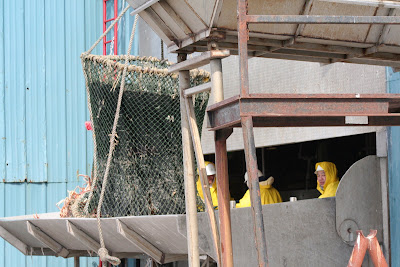 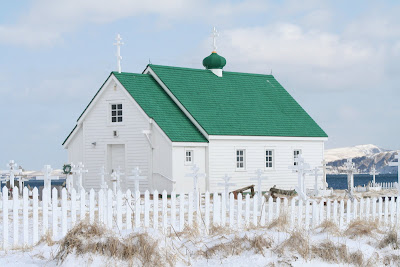 
Our first stop was at the “Trident Store” where we picked up some snacks, milk for my hot tea and a beautiful art print of Akutan harbor & the Trident plant. I looked over the Trident logo clothing but decided I was happy with what I had picked up in the ship’s store.

Not wanting to be carrying the stuff around, Himself ran back to the ship to leave our bags in his room. While he was gone I shot some photos of the gulls, docked ships and watched opilio crab being offloaded. When he got back, we wandered down to the end of the dock and back.


Since it was Easter, we didn’t get to do anything in Akutan town…everything was closed. Besides homes, town consists of a general store, a medical clinic, a café, post office and a Russian Orthodox church. The land is so boggy during melt that a boardwalk has been put in for both pedestrian and ATV travel.

After going from one end to the other, we went down to the beach at the seaplane ramp. The beach is a rocky one, with stones from the gently puffing volcano Mt Akutan. After spending a bit of time there picking out treasures for my rock garden and gifts for those who enjoy such. Then we made our way back to the Indy, happily tired from the walking and fresh air. 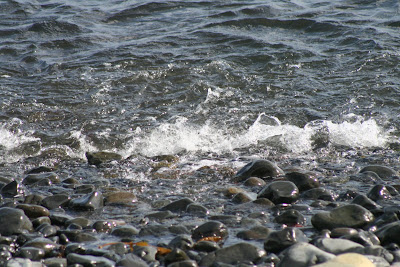 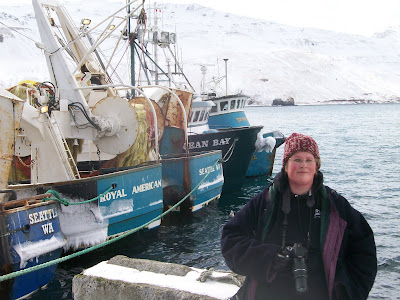 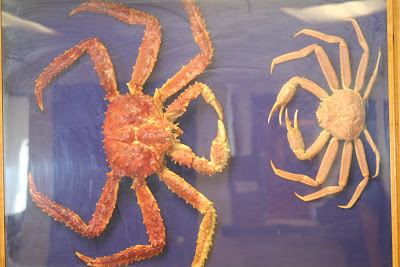 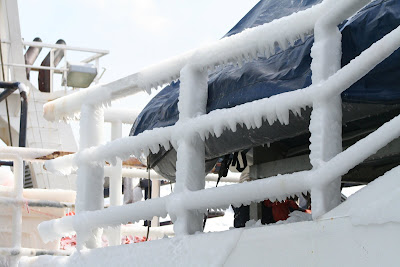 Ice on a crabber just in from the Bering Sea. 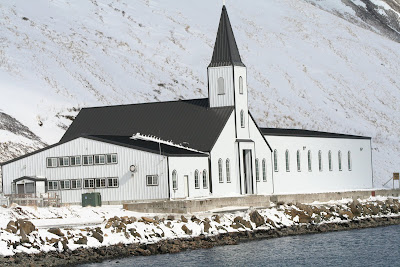 The church that Chuck built.

Snow crab being delivered for processing.ShoppingWalking the gangplank!Trident shore plant