Look At The Sky: October 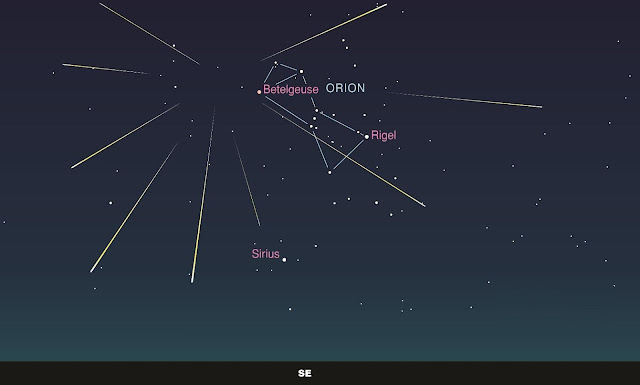 Note that October, 2015 is a wonderful month for early morning planet observing with a beautiful triple conjunction during the third week!

Mercury - In conjunction with the sun, and a nearly impossible time to see our innermost planet  - In VIRGO.

Venus - High in the sky in dark morning skies, watch for the spectacular triple conjunction of Mars, Jupiter and Venus on the mornings of Oct. 16-19; watch as the positions of each change slowly night to night, with Mars and Jupiter VERY close on the nights of Sept 17-18.  Telescopically, Venus appears about 50% illuminated.-  in LEO

Jupiter -  The Solar System's king of planets is tripling up with Mars and Venus this mid-month!  See above. -  In LEO

Saturn - Saturn is now unfavorably placed for viewing and sets about 8 p.m. local time in strong twilight  - in LIBRA.

METEOR SHOWERS FOR OCTOBER:
Observe when the moon does not interfere and attempt to observe AFTER midnight for most meteors to be seen!
The advent of crisper skies and cooler temperatures during fall months lure many sky watchers outdoors during October to view the impending autumn splendors of the Heavens.  In most of North America, it has been found that the month of OCTOBER is the "cloud-free-est" and the skies more deep clear and weather-free than any other month of the year;  the cool nighttime temperatures and waning mosquito populations (thank goodness this year!) are inviting to all of us to spend more time exploring the dark October night sky.   Fortunately October's premier meteor shower - the ORIONIDS - peak after the night of the last quarter moon and observers should work around the rising and setting times of the moon for every meteor shower for the duration of each peak.

October 7  - PISCID meteors - A very long duration (Sept 25 through Nov. 2) meteor shower, very low in southern skies; these are very slow moving meteors [only 29 kilometers per second (kps)] on the Pisces-Aries border; about 15 meteors per hour, some very nice with long trains, will be seen after midnight at which time the shower radiant will be located west of overhead.  The third quarter moon will be present in the sky after midnight  this year, so viewing should be very fair for this shower in 2015, but better for those who observe early in the evening..
October 9  - DRACONID meteors - This is a very short duration meteor shower, unlike the Draconids (above).  It lasts only from Oct. 7 through 10th, producing a very erratic number of meteors as the Earth plummets head-on into this stream.  For example, in 1933, over 30,000 meteors per hour were estimated....from the Comet Giacobini-Zinner's disintegration, the Earth passed the comet only 15 days prior in 1947, resulting in about 1,000 per hours seen in that year.  This year, the moon will be crescent in the morning sky and really not hinder on any day of this shower, so observers will have an opportunity to have excellent skies for the most meteors from this shower.  Note this "circumpolar" northern hemisphere shower to be seen at its best after midnight hours when the Earth is heading directly into the stream....at dawn it will be nearly directly overhead from mid-northern latitudes,  The actual number to expect is totally unknown, but you should be prepared for as many as 200-500 per hour during some encounters!
October 19 - EPSILON GEMINID meteors - This is a week-long meteor shower peaking like the Orionids (below) during a time very favorable for many meteors to be seen early since the moon will be a thin crescent in early evening for the first days of this shower.   The shower actually begins about Oct. 1 with no particular sharp peak, so observing early in the morning on the 14th and 15th might allow for some of the perhaps 5 per hour being seen....these are among the fastest of the meteors striking out atmosphere, traveling at about 70 kps.  The radiant rises about 10 p.m. on the 14th-15th, and will be overhead by dawn (northern hemisphere observers).  A very favorable opportunity to witness this meteor shower.

October 21 - ORIONID meteors - A fair year for observing the famous Orionid Meteors since the moon will be first quarter and will set in the west shortly after midnight.  With its origins in the famous Halley's Comet, this meteor shower is in the high southeastern sky (northern hemisphere) during early morning hours.  The radiant, from near the "club" of ORION, the hunter, rises about 9:30 p.m. local time and will be south of overhead about 5 a.m. when morning dawn commences.  Normally as many as 30-40 very faint and very fast yellowish meteors per hour can be seen from this group, traveling at actual speeds when they collide with the Earth of nearly 67 kilometers per second.  This will be a fine year for early observers for this dependable meteor shower,  Both bright and faint meteors should be seen this year, visible from this spectacular and historic meteor shower.  However, there ARE many associated bright meteors from this shower, so heads up!

Labels: Look At The Sky