Before and After: The Guest Room

I finally got the guest bedroom done.  “Cure times” really hammered my schedule! 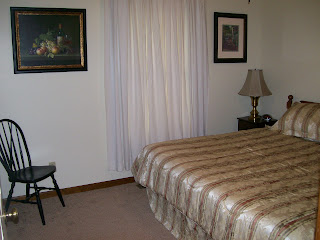 Now, just to remind you of what I started with… 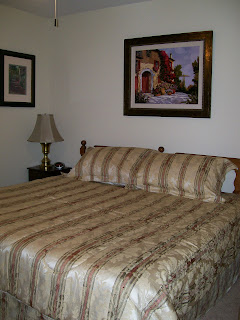 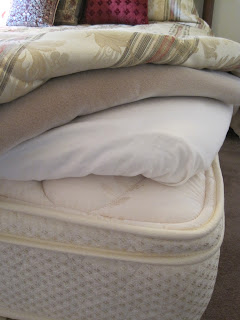 First thing needing attention was the bed. It is a king-size to give the guest ample room to stretch out. I purchased a new pillow top mattress to replace the rather lumpy set of twins that had been in there. The pillows are fairly new so those didn’t need replacing. And on one of my shopping trips to Home Goods I found some beautiful 800 thread count sheets that were soft as butter.
I traded the solid wood headboard with the wood & metal one in the master bedroom. (I’ll be working on the solid wood headboard in a later project.)
So the bed is good… 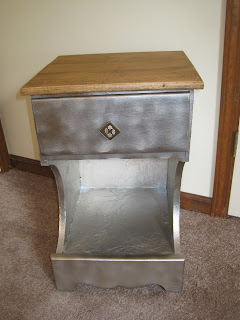 The first night stand is a curb find. When I first brought it home, I just touched up the stain and gave it a good oiling for the dry, dry wood. But with this project I wanted to dress it up a bit more. I’ve been watching all these faux metal redo posts and decided this was just the piece to try it on.
I tried the one using aluminum foil that you Mod Podge on. I have mixed feelings about it. I wasn’t happy with the color change that happened once the Mod Podge was on. So I hit it randomly with some silver spray paint. Then I decided I wanted the pieces to have the aged feel that is in the frames of the artwork hanging the guest room. So I put a layer of Minwax “Early American” over the foil/silver treatment. I let it dry for a few minutes then dabbed/rolled off some. Definitely more what I wanted for the room.
However, I was SO irritated to find out that the “cure” time before you put the poly on a piece is FOUR WEEKS! That’s straight from the people at Plaid Enterprises, makers of Mod Podge. 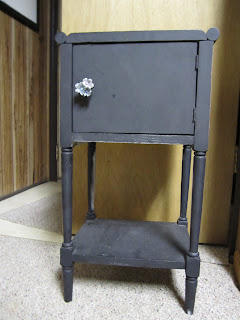 Before...
This little stand is an old telephone stand that belonged to my great-grandmother.  It’s one of the pieces of furniture my Sis gave me back in June.  Since it has sentimental value, I didn’t want to do the faux metal refinish I did on the first nightstand.  So I tried a similar finish using paint so it would be easier to strip off in the future. 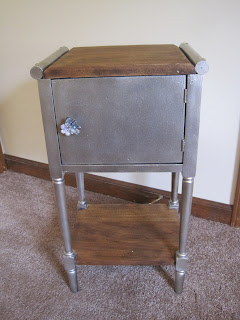 Ahhh… silver paint. I ended up buying 7 different types and spraying each on white cardstock to get an idea of what I liked best.
Both side tables were outfitted with the excellent suggestions left in the comment section of my earlier blog about my September goal. I put in a supply of magazines (some of my less common ones like “Knowledge” or Nat Geo “Traveler”) and some books, notepad and pencil, a small box of tissue, and a coaster for a drink. 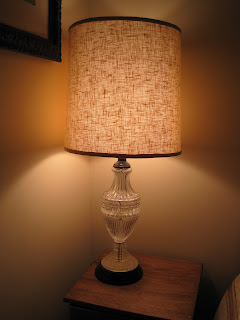 Next I worked on the lighting.
For the left side, I replaced the brass lamp with a cut glass lamp. The cut glass lamp had brass details that just had to go. So I primed, then painted it with Rust-oleum Textured Black. It has the same feel as the texture on the headboard. I bought a new lampshade on my most recent trip to Missouri. There’s a great lamp store there called “Brody’s”.
One the right side I went with a wall mounted swing arm lamp since the side table is so small. My main guests are my parents and this is Mom’s side. She likes to read at night, so this style of lamp was the best option. It got a new shade too, to match the other lamp. 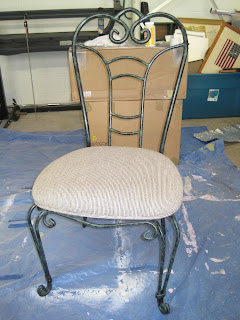 I had been using an old Windsor chair to provide a bit of seating but it didn’t really like it there.  On one of my trips to the ReStore I spotted this chair.  The curves worked perfectly with the rest of the room. 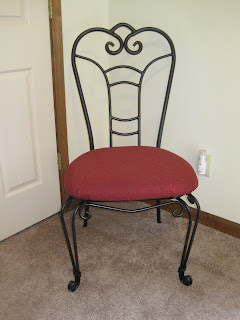 I repainted the metal with the Rust-oleum Textured black paint to match the other pieces.  The cushion was recovered in extra fabric from the curtains. 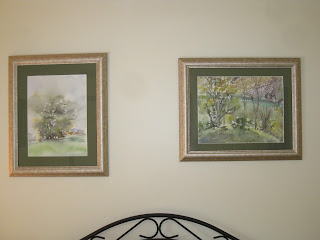 And finally I worked on the walls and window.
I swapped out the art, taking down the large darker pieces and replacing them with ones in lighter tones. These two are original watercolor we brought back from Bosnia. We were introduced to the artist and he invited Himself and I to each pick any of his paintings we wanted! The one on the left is the one Himself selected. It’s a tree with traditional Bosnian hay mounds in the background. Mine on the right is a grove of trees along a river. 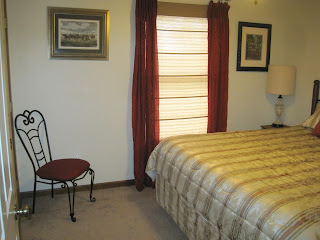 I made the curtains from lengths of textured fabric.  Very simple, just hemmed the cut edges.  I took down the old metal blinds and put in a roman shade I bought at Lowes. 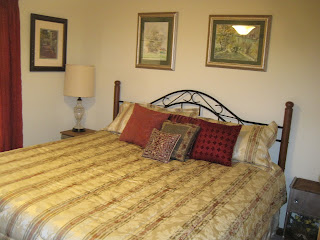 I think it's much more inviting.  It has its first guest right now... my Dad came down to help with a few projects.

Labels: Before and After, Our Home, Projects