A Roof Over Our Heads

I’ve been trying to get a roof put on all summer.
Roofer #1 came with recommendations. He gave me a good bid; we were in agreement on what needed to be done. However, when I called to get the install date in late July that is where things started to go downhill fast. When he found out I was having my Dad come down during the install he started hedging. He called me back and told me he needed to move the install forward to just a few days from that moment… and then he told me “you don’t need to be there.” I told him “no”. So his next date he could do it was on the following Tuesday. I told him that would work great because Dad would still be there.
Monday night he ‘rescheduled’ over the phone because of a delay at another site. He set the date for Thursday… once again saying I “didn’t have to be there”. As I was repeating the date out loud, Dad nodded he could stay. I told the dude Dad wouldn’t have a problem with the new date there was a long pause, then he said OK.
Thursday morning arrived… and Roofer #1 did not. Well over his schedule time my phone rings. He starts out with, “I guess you can see we’re not there.” Now he tells me my shingles aren’t in.
Seriously? The shingles he was all ready to install a week ago and 2 days ago all of a sudden are not ‘in’? Then he tells me “if this is causing me a problem he wouldn’t mind if I used another roofer”. I told him I needed that roof on. So he sets the following Monday as the new date. And tells me “you don’t have to be there…”
On Sunday night I called him and told him I was taking his own advice and finding a competent roofer and did not want his ‘services’.
Roofer #2 came with recommendations. His bid was close to Roofer #1. Set a rough date of the fourth week of August. When I started calling to get the set date, he never returned my phone calls. After a week of trying, I gave up. Fourth week of August came and went with no contact.
So it was back to the beginning… find a roofer. With no other recommendations I went to the phone book and set up appointments to take bids.
Roofer #3 was quick with returning my calls, on time for his appointment and in agreement with what I wanted done. Checked out thru the Better Business Bureau. He set a date of 8 October for the job. Called to check on it 3 days before. Date got pushed back to 14 Oct due to issues at other sites.
Dad arrived on the 12th. 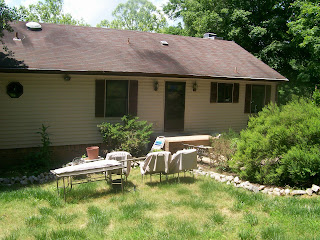 This is WHY I wanted a roof on so badly.  And this is a pre move in photo, so it was 2 years worse for the wear. 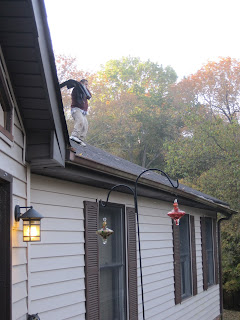 At 7:30am on the 14th three trucks of workers pulled into my driveway.  It wasn’t long before the roof was swarming with people. 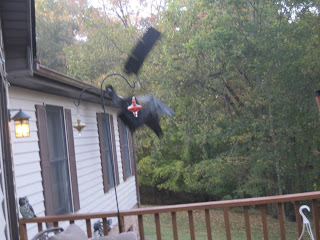 By 7:40am the first shingles were flying into the dump truck. 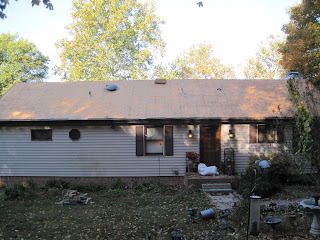 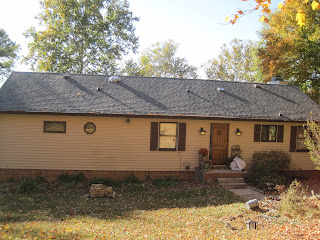 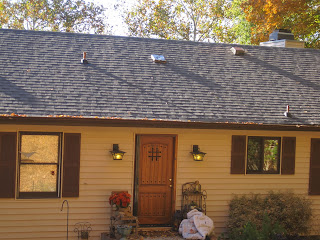 The shingles are by Owens Corning.  They are “Oakwood 30 year dimensional” in Estate Grey.  They are rated to withstand winds of 110 MPH.  OK... my roof will be up the hill in the cow pasture... but the shingles will still be on it!
I think Himself will be quite pleased when he gets home next week!
Posted by Teri at 4:36 PM